I will bless you, so that you will be a blessing 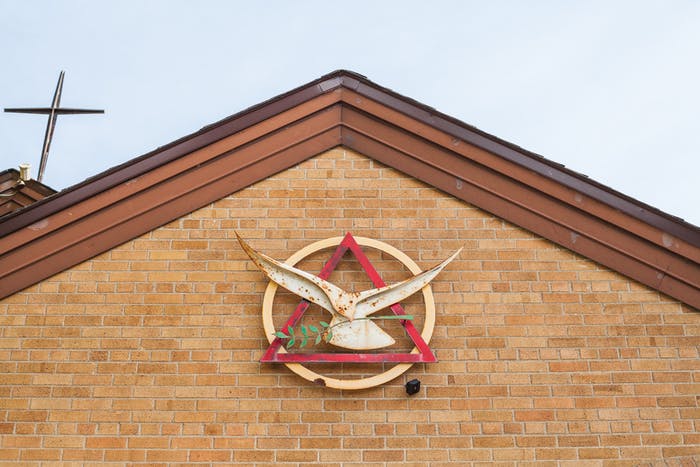 I will bless you…so that you will be a blessing. The article below (edited for length) about another Peace Lutheran, in a community near Minneapolis, was inspiring to me. I wonder, how does it stir your own imagination of how to “be a blessing” in our own community?

Peace Lutheran Church (Lauderdale, Minnesota) was slouching toward extinction. Only 20 members remained. It wasn’t hard to understand why. You’d have to be lost to find the building, hidden next to a giant noise barrier on a backstreet in Lauderdale, the micro-suburb where East Hennepin and Larpenteur Avenues converge. Yet Peace’s problems were greater than geography. There was a past affiliation with the conservative Missouri Synod brand of Lutheranism, whose rigidity drove people away, rather than invited them in. Peace had quietly defied doctrine by elevating women to prominent roles and welcoming anyone to its door. But this wasn’t something you could advertise to bring in new members. It all blew up when an out-of-towner attended service, witnessed the heresy, and ratted them out.
Then came the graying of Christendom. If older parishioners knew there were still churches that walked it like they talked it, their children and grandchildren did not. They’d grown up under a bombardment of pedophile priests, prosperity gospelers who reimagined Jesus as a venture capitalist, evangelicals who found so many loopholes in “love thy neighbor” there were few left to love at all. Religion’s good name was soiled for generations, pushing small churches to the brink.

By the time Rev. Dave Greenlund arrived, just 18 months’ worth of savings remained to stave off closure. “It looked like he was either going to help it die or revive it,” says his wife, Karen Carlsen. “The first service he basically said to them they’re dead. ‘Now what are you going to do?’ Parishioners decided if they were to die, they would die well. So they took loving thy neighbor to a practical extreme. Peace leafleted Lauderdale with 700 fliers, offering to roof houses, fix plumbing, repair anything in need, free of charge…

Greenlund knew Peace would get few takers. Lauderdale is a mix of working people and those who’ve seen better days, with only the first hints of gentrifiers seeking cheaper housing just 10 minutes from downtown Minneapolis. These were not people who publicly confessed their troubles. There was also the natural suspicion of anything religious, the assumption that “free” would come with a downpour of proselytizing. At the time, Peace was a neighborhood non-entity with little good will. “It was always closed, dark,” Greenlund says of his initial impression. “I didn’t even think it was open anymore.” Only two women responded. One needed concrete repaired and the footings fixed in a rotting garage. Another hoped her house could be painted…

Peace stayed at it, cleaning homes for shut-ins, building chair lifts for the disabled, rewiring old houses for widows whose husbands had kept the lights on with the duct tape method. There would be no preaching, no expectation that recipients come to church. They would simply help.

Word spread. If an elderly widow’s furnace broke on Christmas Eve, Lauderdale came to know that the first move was to call Pastor Dave.The idea was infectious. Non-members joined the cause by the dozens. Donations from the grateful kept the church afloat. In an age of foreboding, Peace was proving that tenderness still rose in small, unexpected places…
Peace’s membership has quadrupled since Greenlund arrived, but it remains a poor church. While the congregation itself remains small, parishioners say hundreds of others consider the church theirs. They may never come to service. They may think God an archaic superstition. Yet they nonetheless feel the pull of kindness. “It’s easy to lose perspective and feel isolated and of little consequence,” says Pastor Greenlund. While these may not be times of hopefulness, Peace offers a chance at someday getting there. (Wednesday, October 23, 2019 by Pete Kotz, www.citypages.com )